This post is going to be long, and a bit of everything: I want to talk about some recent releases, what I’ll be working on over the next year, and talk a bit about the design philosophy behind the NewGRFs and other content I’m producing at the moment.

First, though, I’d really like to thank everyone who has supported me on Patreon over the last 18 months. It’s been a bit of a rough year and I haven’t done as much with Patreon as I’d have liked, but the support has paid a few bills, and otherwise been a guilt-free hobby fund which has been an enormous help with staying motivated and creative. If you like my work and want to support development this year, please do consider becoming a patron – just a few dollars a month really means a lot! Patreon will also be a good way to keep in touch with where I’m up to with my projects – I’m committing now to making at least one post a week this year.

There are five major projects I’m planning to complete or make major progress on in 2020.

UKRS3 is, to my surprise, almost done. The Christmas update leaves only six more locos to add – three steam locos, two diesels and a high-speed trainset. Some wagon cargo graphics need adding, and the whole set needs one final art pass, and then I’ll call it 1.0. The target is April 1st – a traditional OpenTTD release date!

At 25 locomotives total, with introduction dates from 1900 to 1993, the set is somewhat slighter than UKRS2, and some people might feel that’s a step backwards. However, as I wrote way back in 2013, “bigger” sets aren’t necessarily better and I think the gameplay of sets can be better crafted if they contain fewer vehicles (and UKRS3 still has more than the original Transport Tycoon!). Additionally, with this set, and others on this list, I’ve decided to restrict the scope strictly to the 20th Century.

Yes, I know there are people out there who will swear blue that they like earlier gameplay, with horse wagons and sailing ships. The problem is, that’s all you get if you go early: Aircraft don’t exist, and the mechanics of the default towns and industries aren’t geared to slow and low-capacity vehicles. There’s nothing that’s fun about early gameplay that isn’t more fun with more capable vehicles, and I think it’s telling that no-one’s ever seriously taken the trouble to create a house or industry set designed for pre-20th century gameplay.

At the other end of the game, almost all modern trains are extremely overpowered compared to their 20th century equivalents, so there are few meaningful differences between them at OpenTTD scale. Frankly, they get boring! And sets which try to straddle the current day quickly become outdated: UKRS2, for example, has none of the Stadler-based locomotives currently being introduced in the UK, and the one fictional “futuristic” loco it includes is about to be overtaken by the current year. The original Transport Tycoon ran 100 years from 1930; TTD ran 100 years from 1950. 100 years from 1900 seems like a perfectly valid timespan for my NewGRFs – and you can play on into the ‘future’ if you like.

I posted a preview of the TaI32 houses early last year, and this year they’re going to get some proper graphics – like UKRS3, hand-drawn in 32bpp at 2x zoom, so they can have some extra detail but still keep a TTD aesthetic.

Like most of my NewGRFs, there’s a strong environmental storytelling aspect to TaI and how it functions. TaI towns have a configurable per-year growth limiter, and the houses are reactive to their environment: higher density buildings will be placed near stations, residential houses will not place next to industries, and the tallest buildings will only appear within a well-defined central business district. The industry set, which is still in the very early stages of planning, will integrate into the towns and provide more complex mechanics for player interaction, such as gamified production increases and FIRS-style supply cargos. Towns and Industries are the central mechanic of OpenTTD – they produce and accept the cargos the player transports – so getting their design right can really transform the gameplay and the sense of a living, coherent game world. Look out for some significant updates on both towns and industries by mid-year!

CivilAI had a big update at Christmas, adding support for passenger trains between towns and significantly improving its train network building. That’s going to continue in the new year; the major task at the moment is implementing a preprocessor for rail (and road) routefinding, to make building longer routes faster and more reliable. A*ing halfway across the map is not very efficient! 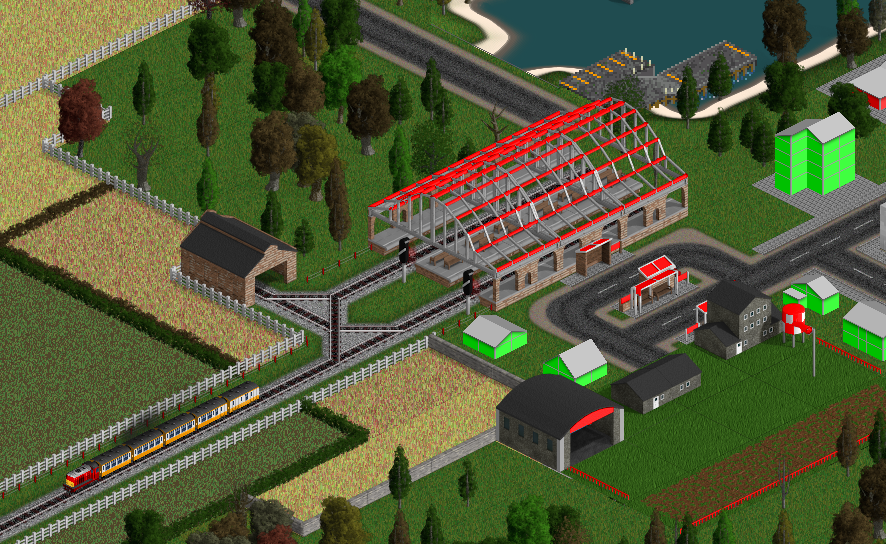 CivilAI has evolved considerably since my first experiments with AI to build roads between towns, and now is – if I say so myself – one of the best AIs out there, again from an environmental storytelling point of view. The point of CivilAI’s design – indeed I think you could argue the point of OpenTTD AI in general – has never been to be the best at playing the game, making money, or scoring points. Rather, it provides background action for the player‘s experience, creating a polished impression of a living world. AIs which link random industries with large numbers of trucks, or rail lines from one side of the map to the other, make more money and do better in comparison competitions, but I don’t believe they are as pleasant to play with for the average player as CivilAI is. If you haven’t tried it recently, please, give it a go and see what you think!

I’m sure you’ve noticed in my screenshots that the landscape tiles and the rail tracks are not anything that’s widely available. This is a 4x zoom 32bpp landscape set, with procedurally generated ground tiles and hand-drawn everything else, that I’ve been working on since the Pineapple Trains days; and while I released an alpha on Patreon some time ago I’ve not yet made it generally available. But that’s going to change this year! 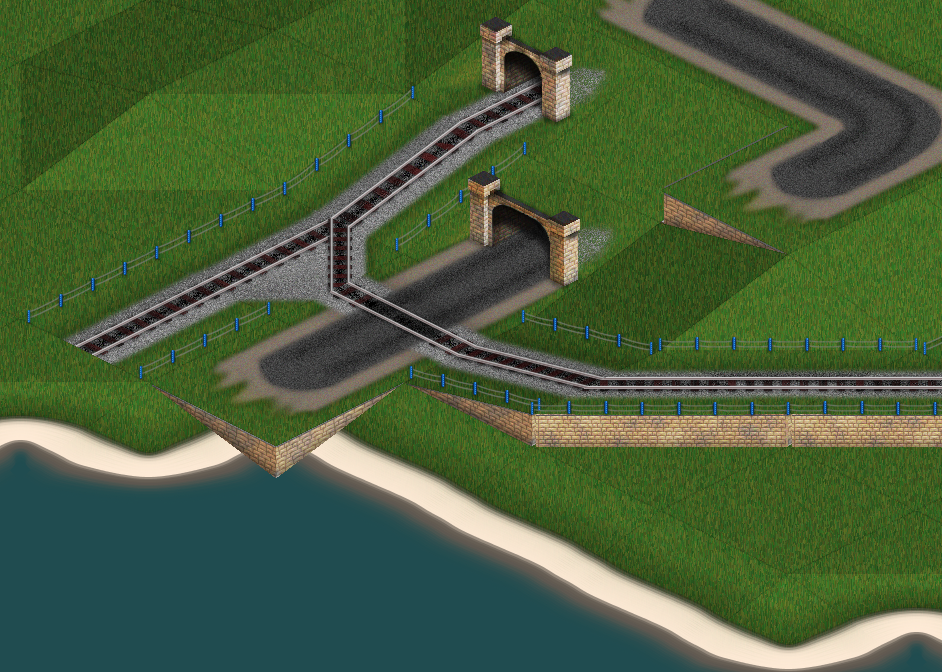 The set currently contains the basic landscape tiles, coastlines, rail tracks and roads, and in the last week I’ve completed the build-on-slopes foundations. I’m not sure how much more I need to do before I’ll be happy releasing a public alpha, but trees, rail signals and bridges are all high on the to-do list. Also, do let me know if you can think of a snappier name than “Landscape workfile”!

Av9.8 is a fictionalised, gameplay-oriented aircraft set which has been around for a while. It was always intended that the Av8 graphics it currently uses would be replaced by 32bpp ez sprites, and this year it’s finally going to happen: not, as originally planned, 3d rendered Pineapple vehicles, but instead 2x zoom hand-drawn pixel graphics, like UKRS3. Since aircraft are very complex shapes (and I want to keep the angled landing / climbing / taxiing sprites) I’ll most likely create these by using av8 sprites as a guide and overdrawing them.

The set will also be getting a stats rebalance, with one aircraft removed (the G333, for being post-20th-century) and a couple added (an early biplane and a 747-400 analogue) to bring the total up to a round 16. I’ll also be renaming the set to reduce the impression that it’s an addon to av8 rather than a set in its own right – any suggestions?

All together, it’s looking like a busy year! 2020 is already looking much brighter for me personally than 2019 was, and I’m looking forward to working on all these fun projects. Let me know what you think or what you’re looking forward to here in the comments, on the TT-Forums, or on Patreon. Happy TTDing to all this year!

1 thought on “The new year is a great big fish!”