Many strategy-game players (and designers) seem to believe that maximum efficiency is the default state; if you don’t have 100% ratings for everything, all the time, it means your strategy – or the game mechanic – is defective. This is certainly the case in OpenTTD, and is something I try to subvert when I can. The Pineapple Trains, for example, are fast but underpowered, meaning a heavy train might take half its route to reach its nominal top speed (if it reaches it at all), rather than hitting top speed before it’s out of the station as more “realistic” train sets do.

With that said, I am hesitantly adding a little more power to the roster in the next update to Pineapple Trains. The update will include five new locomotives, bringing the total count up to 20. Included are a third “Stanley” steamer – a large-boilered 2-8-0; two low-speed, high-power electrics; and the return of a TT classic: 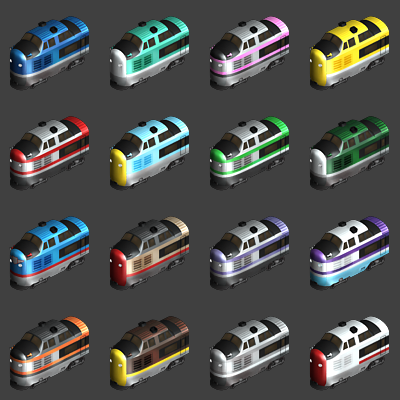 This latest incarnation of the Turbo is a DMU, with passenger capacity, but you can still use it to haul coal if you really want to. 🙂

Look out for the Pineapple Trains “Power!” update, coming to the in-game content system, Bananananas, in the next couple of weeks! In the meantime, you can find the forum thread for the set here. I should think about resurrecting the wiki, too…